LinkGraph is an SEO/Digital Marketing agency. While working there, I led design for their website, SEO Web Dashboard, SEO mobile app, Social Media Assets, and client-work. Below are some high-fidelity designs I did while working there. 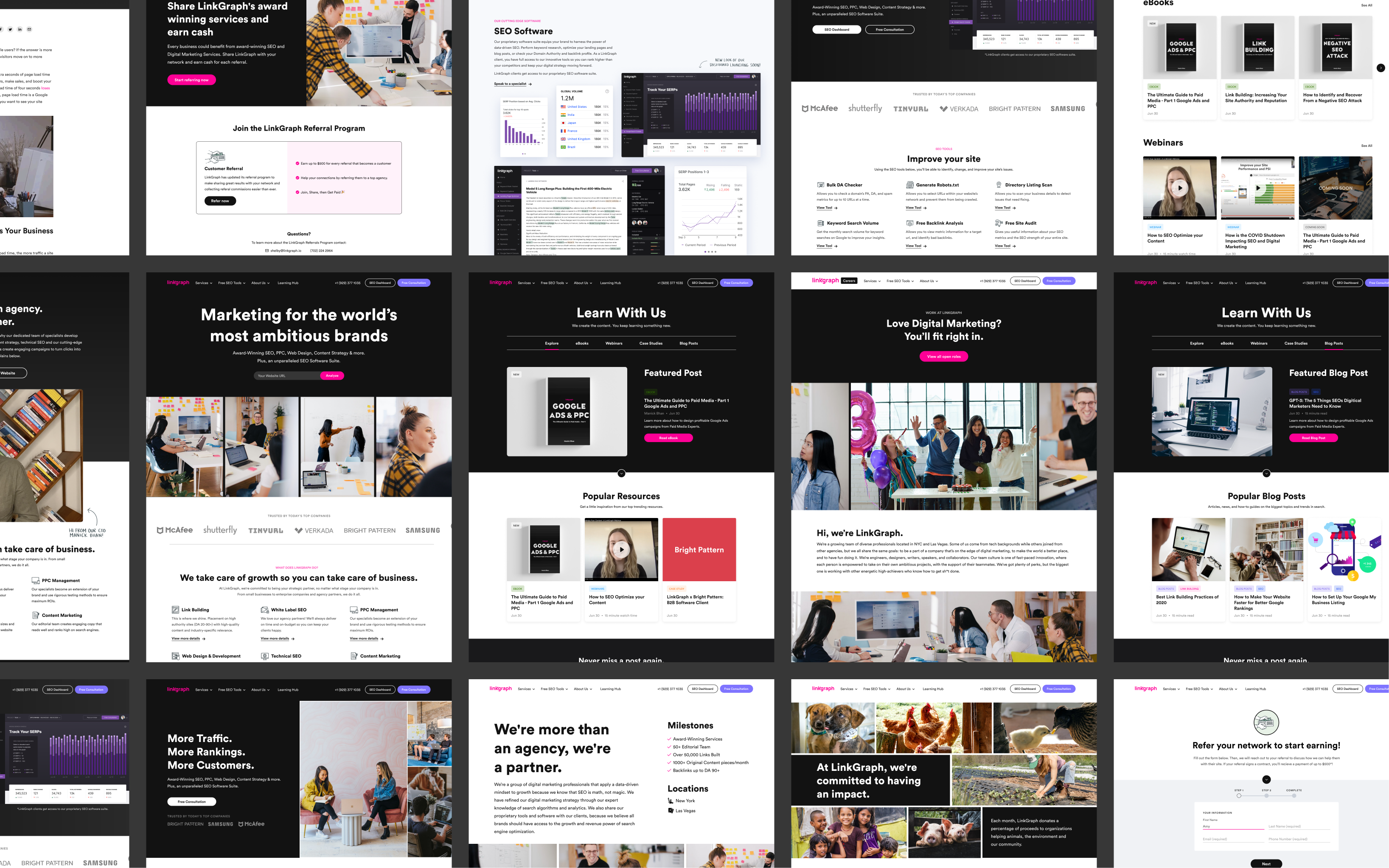 Alongside our Project Manager and CTO, I designed and prototyped 100+ screens for the B2B SEO Dashboard and 50+ for the iOS application. Below are the core screens for the web dashboard. Due to the iOS app not being launched yet, I am unable to provide assets at this moment. 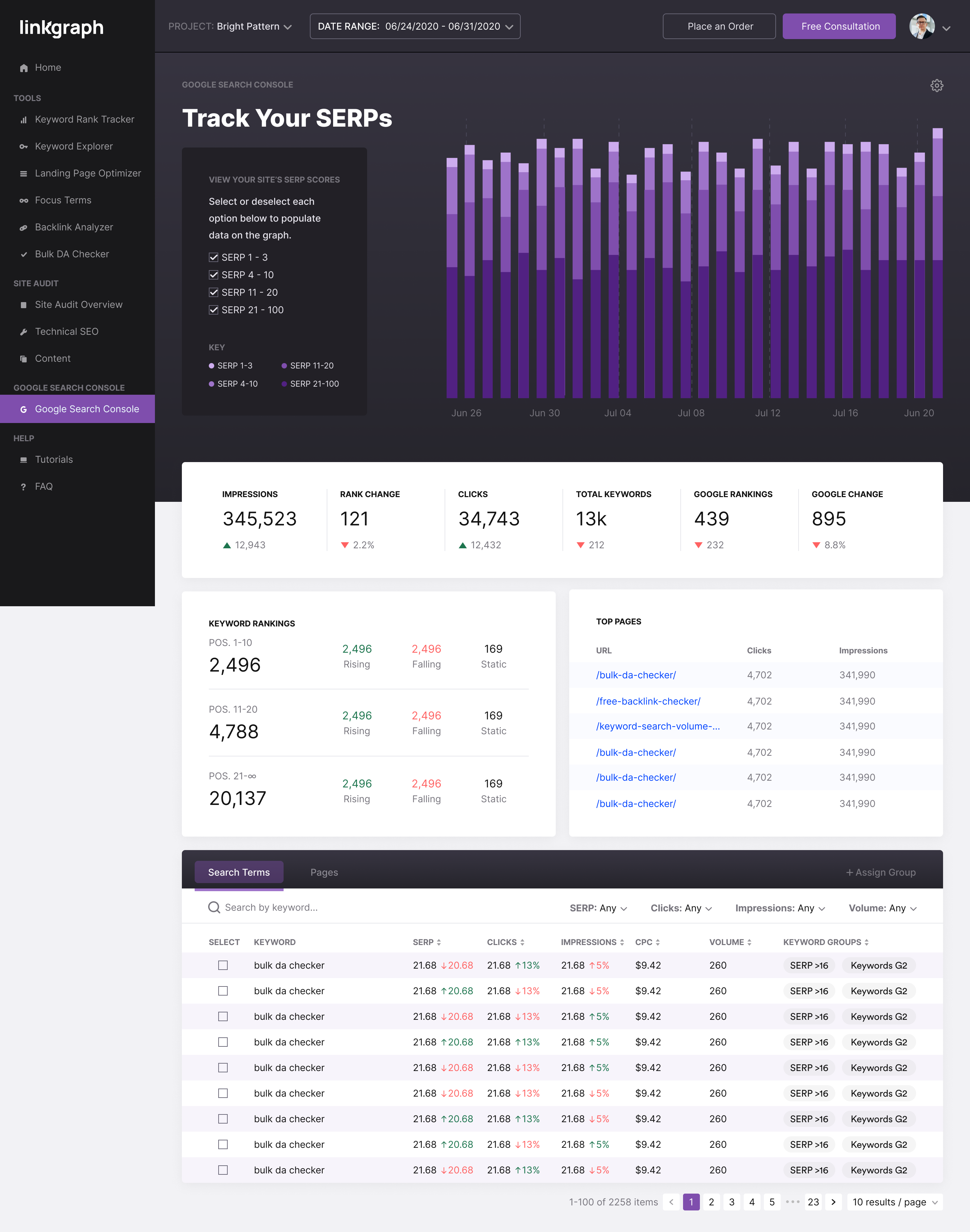 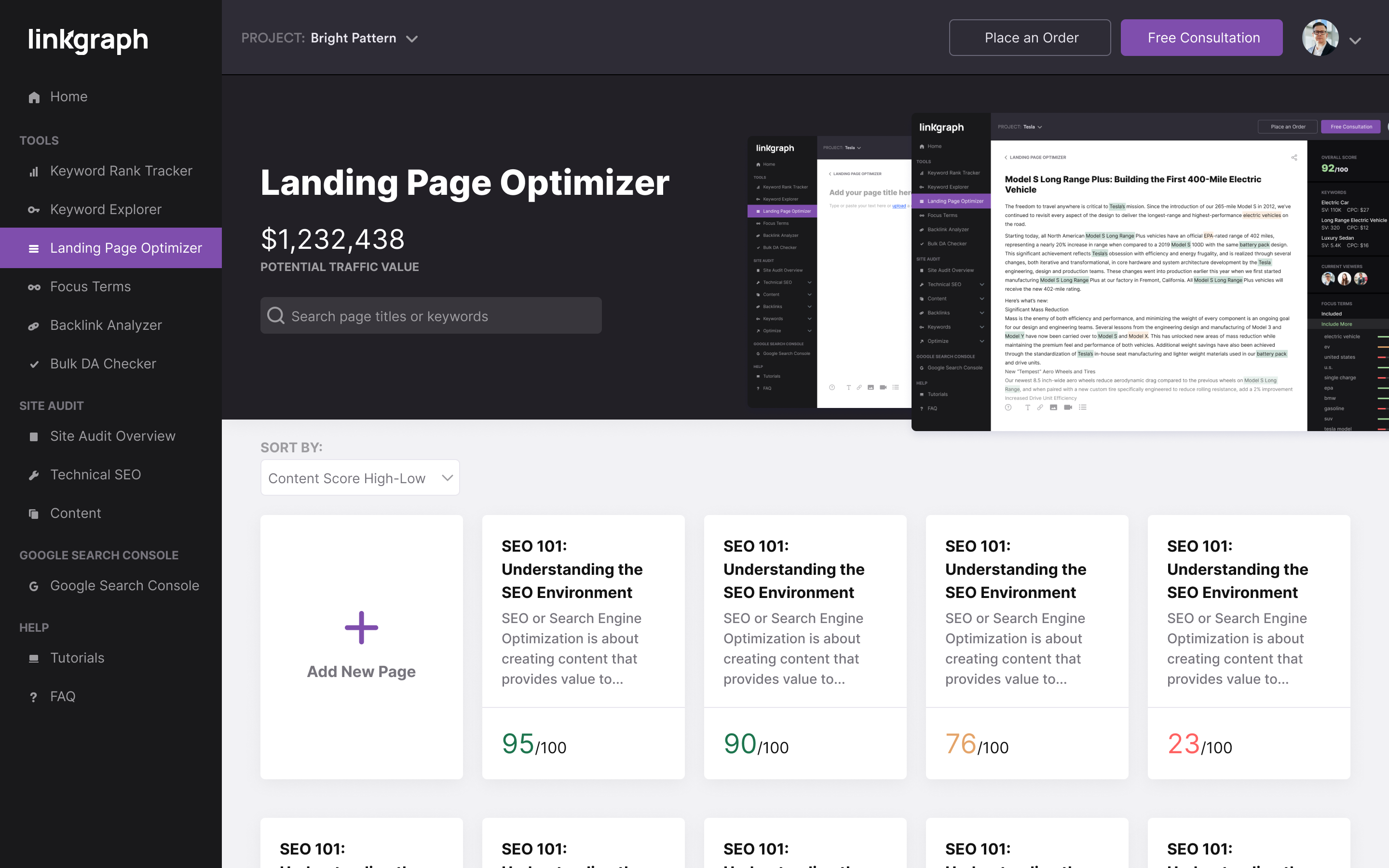 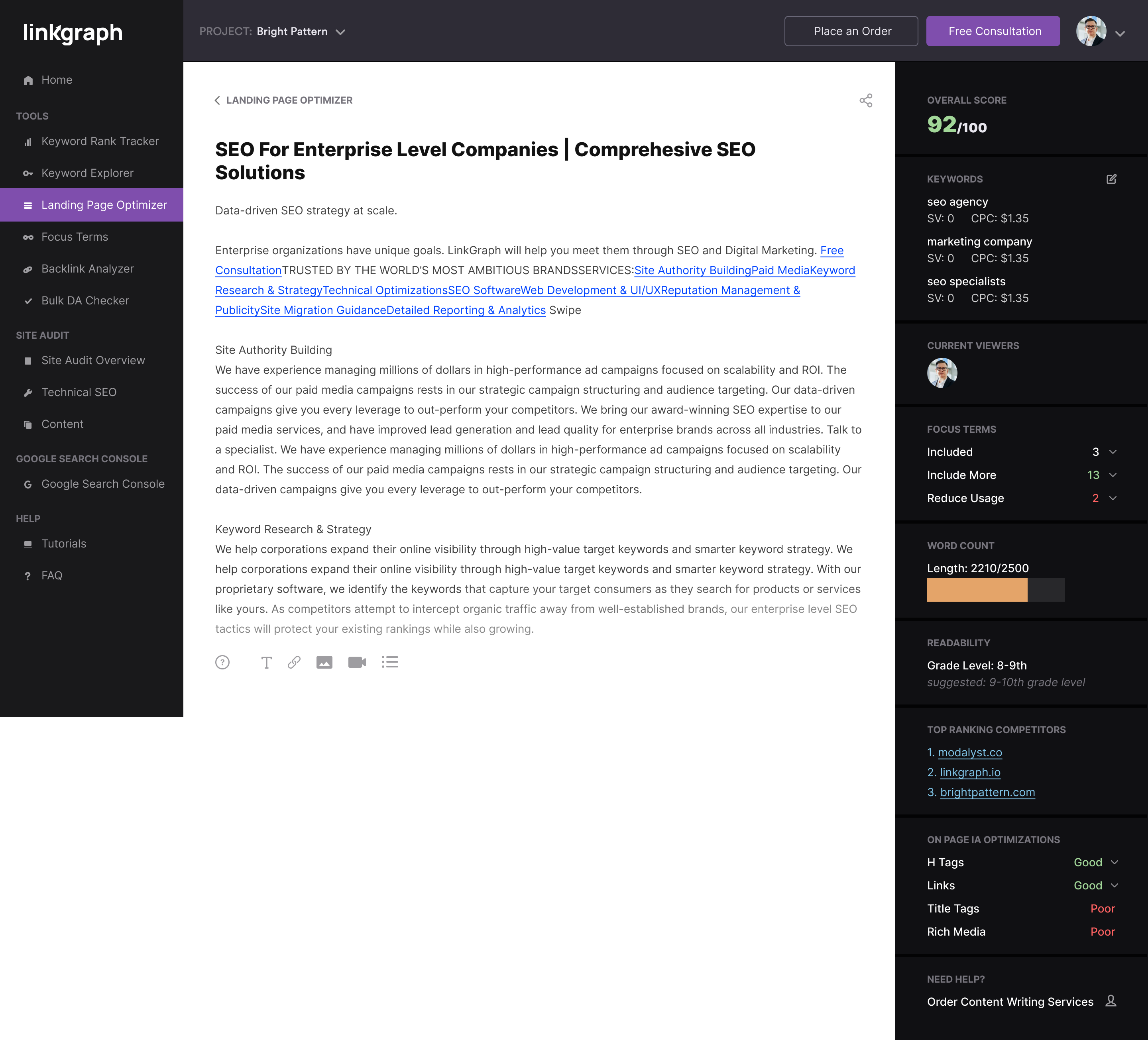 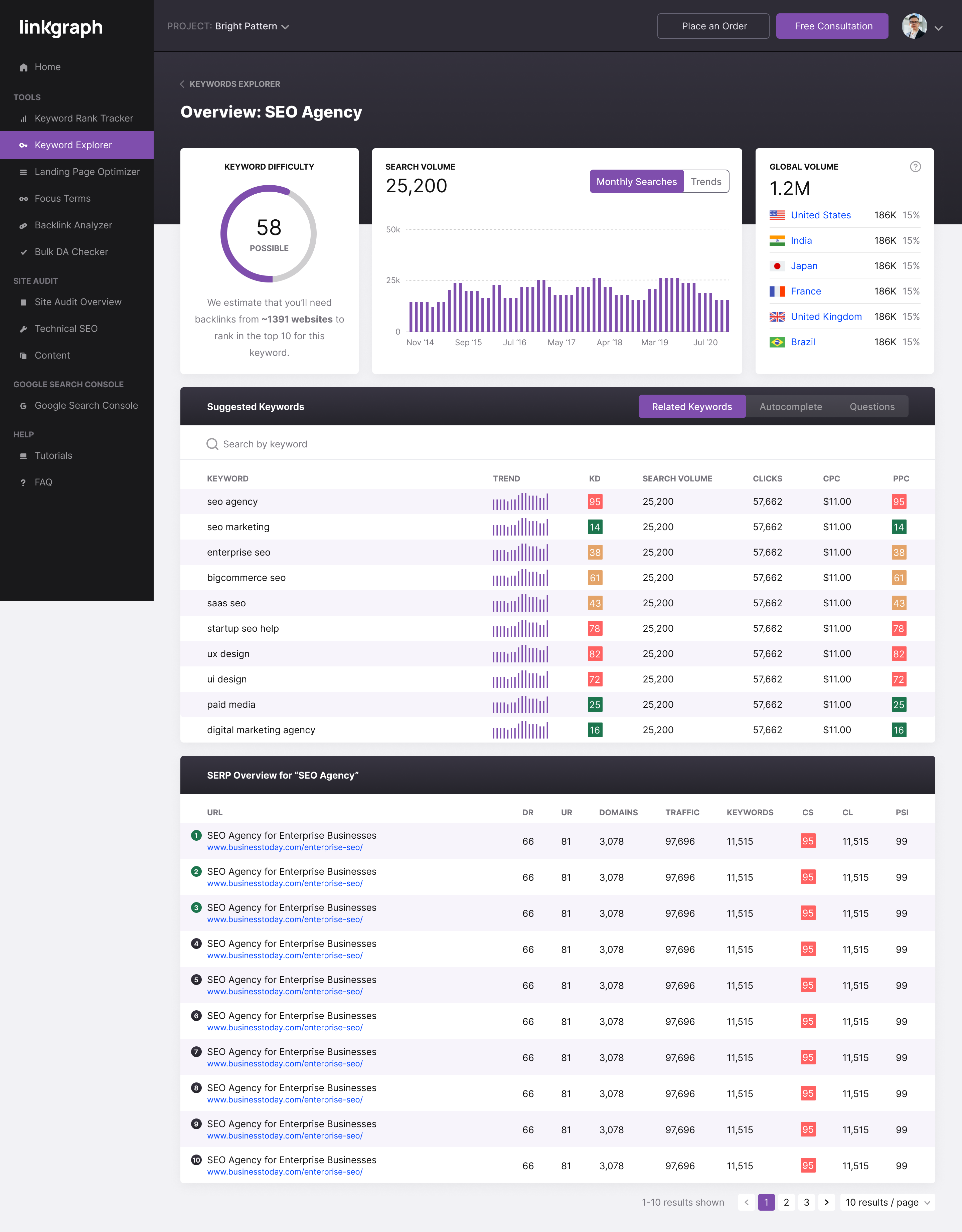 Alongside redesigning LinkGraph's entire site, I also completely redesigned the entire site for LinkLabs, their sister-site. Below shows the home page for the website.

Graphic Illustrations are all done by myself.

When I joined the team, their site was lacking. The pages had lengthy content with no visuals to alleviate the cognitive overload for the user. They also weren't utilizing CTA's throughout their site as much as they should to help with conversions.

Per the Project Manager and CEO, LinkGraph's brand needed to be professional yet fun to set themselves apart from the typical corporate feel competitors have. We incorporated hand-drawn illustrations throughout the site to give a little more personality.

I worked alongside our Content Writer to ensure the content on the page was SEO optimized and designed in a way that was appealing and easy for potential clients to understand and convert. Once I created designs, it was my job to ensure that the designs were handed off to our developer and QA'd for launch.

I have designed over 50+ unique pages for LinkGraph. The majority of these pages can be found on LinkGraph's site.

I was also the in charge of designing our Social Media assets, Social Media Advertisements, Business Card designs, and our eBook cover designs. I have also created design assets for video footage. Altogether I have created over 70+ unique assets for Marketing/Branding. 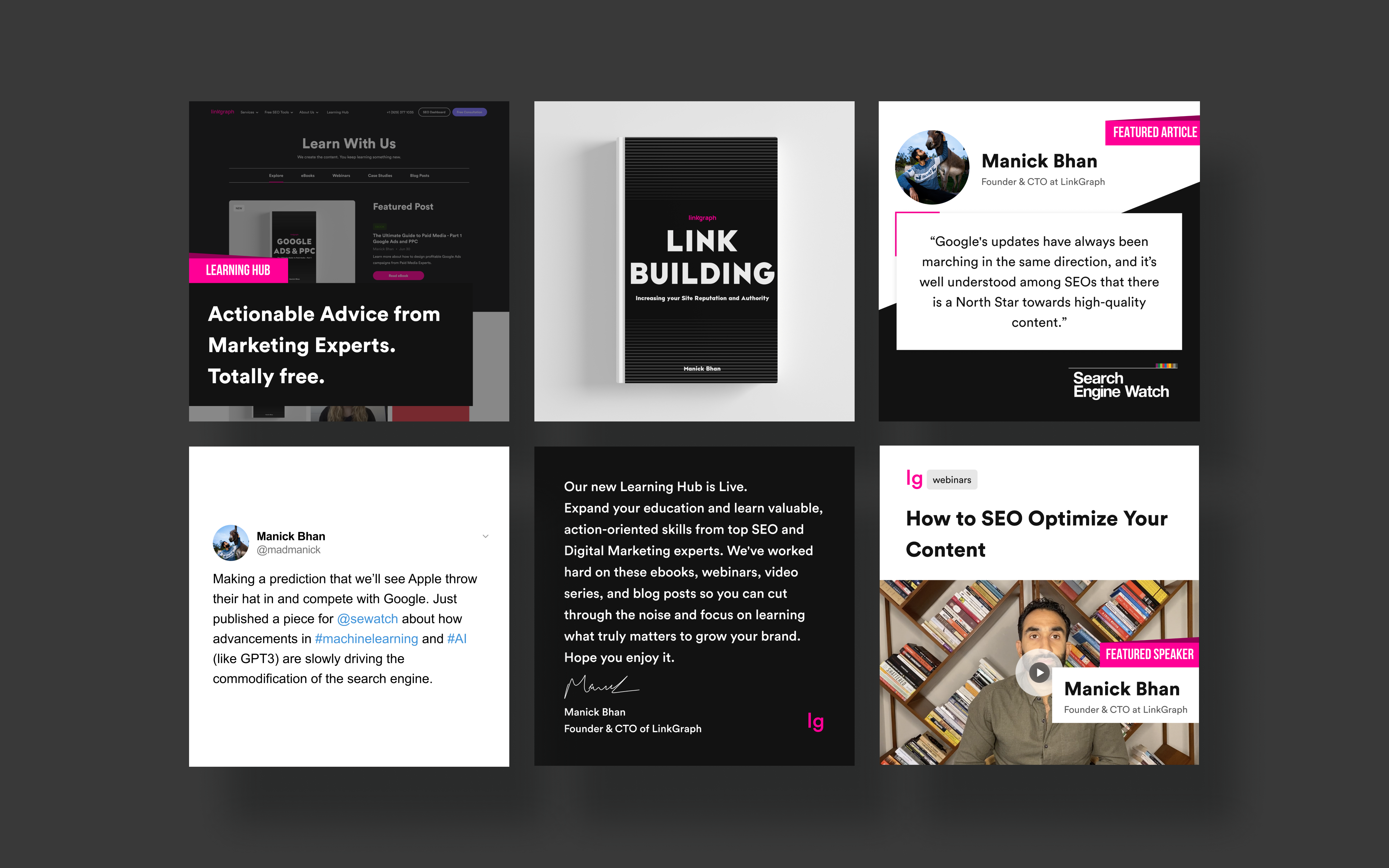 While at LinkGraph I also focused on Infographics as a service. Here is an example of one of the infographics I created alongside our content writer. The illustrations/icons on it are all handrawn by me as well.

Part of LinkGraph's services that it offers is Web Design and Development. I was the Lead UX/UI Designer that worked on client-facing projects.

My responsibilities for design work for clients are as follows:
• Have Kickoff call with clients to discuss goals and vision
• Create designs to hand off to the client for their round of revisions
• Change design based on client feedback
• Handoff design work to developers and answer any questions they might have
• QA pages once developers complete development
• Ensure On-site Technical SEO is optimized (Htags, Meta Description, Image Alt Text, etc.)
• Communicate with clients to ensure they are kept engaged and updated throughout the design and development process

Due to confidentiality, I am unable to disclose specific companies we have done design work for, however I led and designed client work for LinkGraph from June - November 2020.

While working on this app, I ran into some struggles. Initially, when I joined the team, the CEO voiced he did not want a home page and that he wanted a keypad feature. However, after I conducted user research, I was able to persuade him to add a home page and get rid of the keypad tab.

This app also had a lot of information that wasn't intuitive to a user because it is new technology. It pushed me creatively and forced me to understand the user's mind to place the features as intuitively as possible.

Lastly, adding the scheduling call feature right before we launched the new designs threw us a curveball myself and the lead engineer had not planned for. In the end, teamwork and communication between the team brought the new feature to life on time for the launch.